Gun Usage for Self-Defense in Michigan 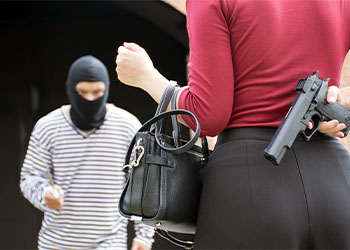 If you’re a gun owner, you should always be aware of your rights and responsibilities. Specifically, you need to understand under what circumstances you can use your firearm for self-defense in Michigan. If you’re looking for more information about your Second Amendment gun rights and how state law affects them, contact me today at the Redmond Law Group in Troy, Michigan. I’m able to advocate for clients throughout the area, including Oakland and Macomb counties. Set up a one-on-one consultation today.

Michigan is known as a “stand your ground” state, which means that you have the right to use deadly force without first retreating if you can show just cause. “Just cause” can be a subjective term, but in general, it means that you have an honest and reasonable belief that your life is in imminent danger, or that you or someone else would be in danger of great bodily harm or sexual assault if you did not act. This law (called the “Self-Defense Act” in the Michigan Penal Code) protects you regardless of where you are as long as you have a legal right to be there (ie. you aren’t trespassing). If you use your firearm against someone else with the intention of causing bodily harm or death and you do not meet these criteria, you may be charged with a crime and could face serious penalties.

The Self-Defense Act is separate from the “castle doctrine” which offers protection when you’re in your home. The Castle Doctrine—so-called because a person’s house is their “castle”—allows the use of deadly force against someone who breaks into your home. However, your use of force must be proportional to the perceived threat. For example, if someone is outside your door in the middle of the night and you preemptively shoot them, your case for self-defense will be in jeopardy because it may be argued that the person was not a real threat to you at that moment. However, if you were to wake up in the middle of the night to find someone had broken a window and was now inside your home confronting you, you would have every right to protect yourself and your family with the use of deadly force.

Use of a Gun/Firearm in Self-Defense

Even though these rights are established as law, any incident that requires you to use your firearm will always be evaluated on its own terms to ensure you were acting within the confines of the law. Many instances of self-defense can be highly subjective and you don’t want to get into a situation where your actions are questioned. This is why consulting with a gun crimes attorney is essential to making sure you have a strong defense and that your rights are upheld. Ignorance of the law is no excuse when it comes to using a firearm, so it’s up to you to educate and train yourself and to seek legal counsel when necessary.

As a citizen in Michigan, you can openly carry a firearm—but your firearm must not be concealed, and you must be carrying it with a lawful intent. Michigan gun laws don’t specifically outline this right, but there is no law that prohibits your right to open carry. However, there are laws that prohibit certain places you can’t open carry, such as banks, churches, hospitals, courts, or daycares.

Gun laws in Michigan can be complex. If you’re in the Troy, Michigan area and have concerns about a recent self-defense incident involving a firearm, reach out to me at the Redmond Law Group. I’m proud to serve individuals throughout the state of Michigan.