Not every dispute needs to end up in costly litigation, with both plaintiff and defendant fighting it out in court over something that has been settled through other means, avoiding an endless run-up in legal fees. 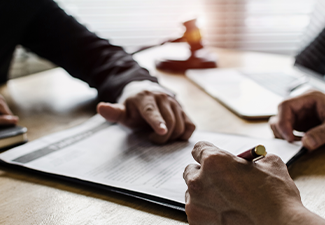 You may have a dispute over whether you owe a refund of a tenant’s security deposit or jostling with a supplier over contractual obligations, and pretty soon someone decides the best route to resolution is a lawsuit.

Before going that route, however, you must have alternative dispute resolution (ADR) approaches. First, you can start with negotiations between the parties involved. If negotiations lead nowhere or to an impasse, you can then consider mediation and/or arbitration.

If you’re facing a dispute in Troy, Michigan, or anywhere in the counties of Oakland and Macomb, contact me at the Redmond Law Group. I am experienced in all phases of dispute resolution, including pre-lawsuit negotiations, discovery, law and motion practice, mediation, settlement, trial, and arbitration.

What Is Alternative Dispute Resolution?

Alternative dispute resolution, or ADR, is a means to avoid lengthy and costly courtroom battles. According to the Department of Labor (DOL):

“The term alternative dispute resolution (ADR) means any procedure, agreed to by the parties of a dispute, in which they use the services of a neutral party to assist them in reaching agreement and avoiding litigation. Types of ADR include arbitration, mediation, negotiated rulemaking, neutral factfinding, and minitrials. With the exception of binding arbitration, the goal of ADR is to provide a forum for the parties to work toward a voluntary, consensual agreement, as opposed to having a judge or other authority decide the case.”

The primary benefits of using ADR are to avoid the expense, delays, and uncertainty associated with traditional litigation. Notice the use of the terms “neutral party” and “voluntary, consensual agreement” in the DOL’s definition. Unless the parties involved in the dispute agree to binding arbitration, the result should be a meeting of the minds and mutual agreement on a solution satisfactory to all.

As mentioned earlier, the first step when a dispute arises is to attempt negotiations between the two sides. Negotiations do not normally involve the intervention of a third party, just the principals or representatives who try to work things out individually. If negotiations fail, the next step can be mediation.

Mediators are individuals trained in negotiations, tasked with bringing opposing parties together to reach an agreement or settlement. The process of mediation is not binding.

The mediator meets with both parties, jointly and separately, to discuss the issue or dispute. After exhausting the meeting and discussion process, the mediator will propose a solution. It is then up to the parties involved to accept or deny and implement the solution.

Arbitration is more formal than mediation, and it is more like a trial in the way it’s conducted. There is a discovery process, along with simplified rules of evidence – simplified in that hearsay evidence is admissible.

Before arbitration, the parties generally agree that it will be binding, though it doesn’t have to be. The arbitrator, who does not need to be an attorney, can be an individual or a panel of individuals. The arbitrators can be chosen from fields more suitable to the subject of the dispute rather than just from legal circles.

The benefits of arbitration are several, including that the proceedings take place outside of the public eye. Everything remains private. It is also usually quicker than a trial because of the relaxed rules of evidence. Plus, you get to choose the “judge,” i.e., the arbitrator or panel. It is generally less expensive as well, and if it’s binding, it will bring finality to the dispute.

Med-Arb is a hybrid approach wherein the parties agree first to mediation, and if that fails to resolve matters, to continue to the binding arbitration. With the potential of a binding decision being handed down if mediation fails, the parties may be more willing to settle differences before the arbitration clause kicks in.

When a dispute arises and your efforts at resolving the situation through negotiations stall or face an impasse, you need to seek legal counsel to take the next step, whether through mediation or arbitration. I can listen to your story, help evaluate the circumstances, and seek to present you with your best options going forward.

If you’re anywhere in Oakland or Macomb counties, contact me immediately at the Redmond Law Group in Troy, Michigan. Let’s work together to get your dispute resolved before matters end up in court.