Honest & Accessible Legal Counsel
For the People of Michigan
Contact Me

What are the Elements of a Breach of Contract Claim?

As you may have guessed, breach of contract simply means that one party to an agreement fails to deliver on a promised obligation.

For example, Company A contracts with Company B to provide a weekly shipment of 200 widgets each Wednesday. 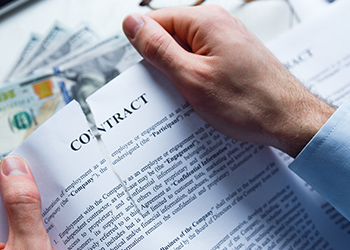 Company B fails to meet the deadline but fulfills the agreement two days later. Does this constitute a breach of contract? Accountant Bob promises to provide a weekly profit-and-loss statement for Company C, but weeks later has not delivered a single statement. Is this a breach of contract?

As an experienced business litigation attorney, I chose to start my own firm, Redmond Law Group, in Troy, Michigan to help individuals and businesses answer questions like these. I’m also proud to serve clients throughout Oakland County and Macomb County, so if you find yourself at either end of a breach of contract dispute, contact my office immediately. The first recourse is to settle matters through negotiation — but if that fails, I will represent you vigorously in court.

What Constitutes a Contract in Michigan?

A contract can be written, oral, or in some cases even simply implied and still be considered valid in Michigan. However, if matters go to court, it must be proven that the contract complied with five essential elements:

When matters get to court, written contracts are often easier to show that the five elements exist and that the contract is valid. Oral contracts can obviously be harder, as the proceedings may devolve into opposing recollections of what was agreed to.

Michigan also requires that some contracts must be in writing and not oral, including real estate transactions, marriage, contracts that cannot be completed within a year, contracts involving debt obligations, and sales contracts of more than $200 in value.

As for implied contracts, the Michigan Supreme Court has ruled:

“A contract is implied where the intention as to it is not manifested by direct or explicit words between the parties, but is to be gathered by implication or proper deduction from the conduct of the parties, language used or things done by them, or other pertinent circumstances attending the transaction.”

In other words, proving the existence of an implied contract can be a difficult challenge, though the length of the mutual conduct of the parties is an important element in establishing a contractual basis.

The Different Types of Breaches

A breach of contract represents a failure to perform a material term of the contract. A contract is either performed or it isn’t. Failure to fully complete one’s terms of a contract fall into three distinct categories:

This means the performance of one party comes close to what is required but still falls short. The non-performer can be required to compensate for the shortfall in performance. Substantial performance can also fall under the immaterial breach category.

One party’s failure to perform causes the other party harm. The harmed party can be entitled to compensation for damages.

This occurs when one party, through words, actions, or both, clearly indicates it will not fulfill its obligations. In terms of compensation for damages, this often mirrors the consequences of material breach.

Going back to my opening scenario of one party’s failure to fully live up to its obligation to deliver widgets, if he delivers 150 widgets on Wednesday and the rest on Friday, that could be an instance of Substantial Performance. If Company A delivers none for the week and the other party loses customers and revenue as a result, that would be an example of a material breach. Accountant Bob, who did nothing for weeks, would clearly be in breach of contract.

Proving a Breach of Contract

The Michigan Court of Appeals has succinctly summarized the four elements needed to prove a breach of contract. Those elements are as follows:

If the company contracting for the 200 weekly widgets has 1,000 of them sitting in a storeroom and thus has suffered no economic or other damages due to non-delivery, then legal action for compensation would likely fail unless noneconomic damages could be proven.

Remedies for a Breach of Contract

If you’ve been the victim of a breach of contract, you have a few different options for recourse. Those options include:

Get Guidance from an Experienced
Michigan Business Litigation Attorney

As you can see, pursuing a breach of contract claim can involve several complex legal challenges, starting with simply proving you have a valid contract. When you contact my firm, we can schedule a simple case evaluation to discuss the details of your personal situation. I’ll go over all of your legal options with you and we can work together on developing an optimal strategy that can help you move forward. Generally speaking, I prefer to resolve disputes through negotiation or arbitration as much as possible, but I am certainly prepared to represent you and your rights in court when necessary.

My firm, the Redmond Law Group, is located in Troy, Michigan, and has a proven track record of success helping individuals and business owners throughout Oakland and Macomb County. If you’re facing a breach of contract issue or have questions about a potential breach, call my office today. You can rely on my extensive knowledge and experience to provide the guidance and support you need.