Honest & Accessible Legal Counsel
For the People of Michigan
Contact Me

What Evidence is Admissible in a Contract Dispute? 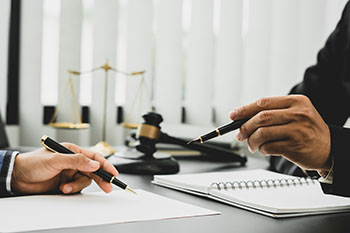 It’s not unusual for business disputes to surface and disrupt everyday operations. Some of these are interpersonal matters that can be resolved individually through discussions or negotiations. Other disputes can involve breaches of contract when one party fails to live up to a promise.

When a company faces a breach of contract issue, whether it’s the party being accused or the party making the accusation, the matter often seems destined for court. When it does, the question that most often arises is — what type of evidence will be permitted?

Like all states, Michigan establishes rules for both the types and the admissibility of evidence in court cases. Evidentiary rules are also bound by the U.S. Constitution and the Constitution of Michigan.

If you are facing a breach of contract court case in or around Troy, Michigan, or throughout the areas of Oakland County or Macomb County, contact me, business litigation attorney Ian Redmond, at my firm, the Redmond Law Group.

If you have questions about a pending or possible breach of contract lawsuit, reach out to my office immediately so I can review the situation and advise you of your options. I can answer all of your questions, including what types of evidence will be necessary to press your case or your defense. I will work to help you avoid costly courtroom litigation, but if that becomes necessary, I am fully prepared to fight for your rights.

The most common type of a contract dispute — and the one characteristic that cuts through all allegations of a breach — is the alleged non-performance of one of the parties to the agreement.

This could mean a supplier that fails to deliver the weekly quota of parts it has agreed to send a manufacturer, or the manufacturer has received them and failed to pay on time. It could also be a case of someone not providing an agreed-upon service — for instance, an accounting firm that fails to remit payroll taxes on time to the state or the IRS.

Other disputes can be over non-disclosure agreements (NDAs) or confidentiality agreements. This typically occurs when someone leaks a trade secret or shares proprietary intellectual property, such as an algorithm. Employment contracts can also be breached: the company lets the contracted employee go without justification, or the employee leaves before the contract is finished.

There are also implied and real warranties in products and services provided to consumers, which if not honored can lead to breach of contract disputes. Lease terms can also be breached.

If you’re in business, there can be many occasions when a breach can be alleged, so you must be prepared, not only with carefully drafted legal documents in writing, but also by following the motto, “The best offense is a good defense.” Know your rights and be prepared to exercise them.

In a contract dispute, there are four general types of evidence:

Relevance, materiality, and competence are the three general standards for admissibility of evidence.

“Although relevant, evidence may be excluded if its probative value is substantially outweighed by the danger of unfair prejudice, confusion of the issues, or misleading the jury, or by considerations of undue delay, waste of time, or needless presentation of cumulative evidence.”

Michigan Rule 404 prohibits evidence of a person’s character unless it is presented “as proof of motive, opportunity, intent, preparation, scheme, plan, or system in doing an act….”

Get Help from an Experienced
Business Litigation Attorney

If you’re confronting a breach of contract dispute, you are going to face complex legal challenges whether you’re pursuing an allegation or defending yourself. As with all disputes, it’s best if matters can be ironed out through negotiation, mediation, or arbitration. This will save unnecessary court costs as well as hopefully preserving the existing contractual relationship.

Whenever confronted with a dispute over a contract, it’s important that you seek legal advice immediately. Don’t let matters fester where the only option becomes a lawsuit.

If you’re facing a contract dispute of any kind, call me at the Redmond Law Group. Let me listen to your situation and advise you of your options. We can proceed from there, whether it’s by resolving the issue internally or squaring off in court. If you go to court, you will need solid evidence in your favor or in your defense. I can help gather and present the proper evidence for your side of the argument.

My firm, Redmond Law Group, is located in Troy but proudly serves clients throughout Oakland County and Macomb County. With over 15 years of experience resolving business litigation matters, you can rely on me for the experience, knowledge, and resources you need to seek a resolution for your situation. Contact my office today to schedule your own case consultation!